I'm guessing Lasik is completely out of the question?

In both classic and cult horror films, there are really only two “original” monsters. There is Lon Chaney, and then there is Paul Naschy. Between the two, they have portrayed every possible monster in every kind of film, often through layers of latex, faux fur, and make-up. If Chaney was “The Man of a Thousand Faces”, Laschy probably clocked in with 999.

In Blue Eyes of the Broken Doll (or Los ojos azules de la muñeca rota in its original Spanish release), Paul Laschy only had to wear two of those faces. One was that of the male lead, Gilles; the other was as the writer of the film’s screenplay. On this project, Naschy left the directing duties to Carlos Aured. This was one Aured’s earliest efforts in a career that spanned just over a decade.

Gilles (Naschy) is a drifter who rolls into to town looking for a job, quickly landing one as a handyman for three reclusive sisters. The sisters are Nicole (Eva Leon), Claude (Diana Lorys), and Ivette (Maria Perschy). Eduardo Calvo plays Doctor Phillipe and Antonio Pica is Inspector Pierre. A nurse, Michelle (Inés Morales) also works for the sisters, caring for Ivette who is confined to a wheelchair.

As the alternate English title House of Psychotic Women would suggest, each of the three sisters has issues. Nicole is something a jealous nymphomaniac ready to bed down anyone man in sight. Claude is physically and emotionally scared by past events, the same events that landed Ivette in her wheelchair.

Gilles has psychological baggage of his own, often seen in flashbacks and violent dreams. He is either the hero of the film, or the killer, we’re never certain. Or he may be neither.

The music in Blue Eyes of the Broken Doll is jarring and odd, highlighted by repeated refrains from Frère Jacques. It is a haunting familiar song many of us might recall from childhood. Even if this tune doesn’t ring a bell for you, you may be disturbed to hear yourself humming it quietly to yourself after seeing this movie. The song is used to shocking terrible effect as our mysterious killer stalks the women in town.

Did I forget the mysterious gloved and masked killer? It’s a giallo; of course there is a killer. He seems to prefer blonde, blue-eyed young ladies for his victims and he favors various tools and implements for dispatching them, never the same one twice.

Oh, he also takes their eyeballs. And while we are spared any scenes of the actual removal, we do get to see the killer carry his prize around in a glass bowl after his latest murder.

Always blue eyes, of course, thus the title. The reason behind the “broken doll” bit, however, is saved for the big reveal late in the movie.

Son of a bitch ... wasn't satisfied with just killing her ... gouged out her eyes.

Besides the masked killer and his gloved hands, all the other usual giallo features are all in place, including weird camera angles, psychological terror, bizarre music, and a bit of nudity and sex (though not a lot of either really). The kills are all appropriately gruesome, though just fake enough to ease any empathetic pain we might otherwise feel.

The directing is competent if not very remarkable. The story is typical giallo. It’s hard to be certain because of the dubbing, but the dialogue isn’t horrible and the plot, while thick with knots and misdirection, is fairly straightforward. Even the bits that don’t make sense get explained in the end. In addition to the three sisters (highlighted by the quite lovely Eva Leon as Nicole), we are provided a little bonus eye-candy in Inés Morales (Michelle the nurse) and a brief but noteworthy appearance (uncredited) by Sandra Mozarowsky as tourist. Naschy has a studly wood-chopping scene plus he gets all the sex in the movie. 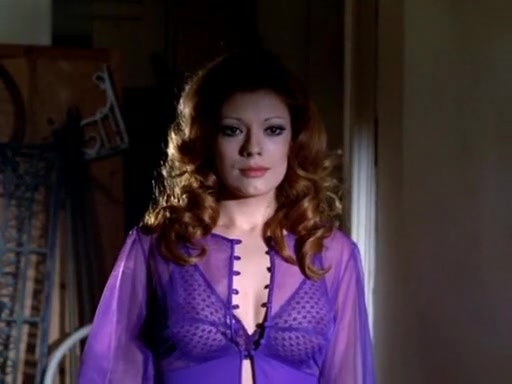 I'm worried about what's going on in this house.

Blue Eyes of the Broken Doll is what it is, a giallo movie in the classic Italian tradition, made by a Spanish screenwriter and director. It may not quite hit all the usual marks an Italian version might, but it is still a pretty good movie in the giallo tradition.

Fairly well written with decent dialogue; Naschy is a star in Spain; production values expected of the genre; sex and nudity but not overly graphic.

Naschy is a top level "cult" writer/actor/director; the music is odd, but fitting; performances are better than average throughout, if occasionally overwrought.

This is a Spanish giallo film and it shows; bloody (yet fake looking), frequent death; typical giallo tropes (mask, gloves and all); a bit of nudity and sex, as expected.