A girl of ancient name shall become queen ...

Long before we had the Lord of the Rings Trilogy, we had the 1980’s. Headed up by the Arnold Schwarzenegger vehicle Conan the Barbarian, the 80’s was the decade for sword and sorcery fantasy films. In addition to Conan (both the Barbarian and the Destroyer), we also had the likes of Ladyhawke, The Beastmaster, Legend, Red Sonja, Excalibur, and Willow.

And then there is Krull.

As an 80’s fantasy film, Krull bridges the gap between true classics like Conan, Legend, and Ladyhawke and the B-movie cult efforts like Deathstalker, Sorceress, and The Sword and the Sorcerer. Krull was not in the same league as the former group but it still outclasses the latter. Please feel free to place Red Sonja in either category according to your individual tastes and tolerance for Brigitte Nelson.

Krull is … well, Krull. While this movie may borrow bits and pieces from a variety of sources, it is nevertheless a distinct creation all its own.

You can call it cheesy, inept, or even ludicrous. While it certainly is a mixed bag of tropes, archetypes, and originality, you still have to admit that Krull, taken as a whole, is something pretty unique.

Just as Krull straddles the line between being an excellent “cult” genre film and a truly “great” genre film, the movie demonstrates a similar split personality throughout. Let’s start with this simple question: Who (or what) is Krull? Even if you recently saw this movie, you may need a minute to come to the correct answer. No, it’s not our hero, Prince Colwyn. It’s not the Beast, the movie’s big bad. It’s not the five-pointed weapon that Colwyn throws around and it’s not the name of the Beast’s citadel or Colwyn’s besieged kingdom. Krull is the name of the entire planet where the story takes place. It is mentioned all of once in the entire movie. Unless you are one of the die-hard fans of this movie (and there are more of us than you think), I give you a 50-50 chance of knowing that.

Now try this one: what’s is the name of that five pointed knife weapon Colwyn wields? The weapon itself is iconic, but the name may not be familiar to most. They call it “the glaive” and it is the one weapon that can defeat The Beast. Only it doesn’t defeat The Beast at all, does it? Colwyn acquires the glaive after a very scenic montage sequence, but he doesn’t actually need it to destroy The Beast, despite what he has been led to believe.

Ynyr, the hermit/mystic who guides our hero, tells of the prophecy which is used to bookend the film. The last part of the prophecy tells of a son who will one day rule the galaxy, despite having a mom and dad who only rule a local municipality. Spoiler alert: there’s no son, not in this movie. And just for the record, there isn’t a sequel either. But hey, when Ynyr first shares this prophecy with us, he admits right up front that he really doesn’t know if any of this shit is true.

As he sets our heroes on their path to fame and glory, it seems Ynyr only half believes the story he’s telling. He also admits early on that maybe young Prince Colwyn just isn’t the hero foretold in this prophecy either. It’s one of the many things I love about this movie; nobody is fully invested in their own narrative.

... and together they shall rule our world and their son shall rule the galaxy.

Krull was produced by Ron Silverman and directed by Peter Yates. Yates has over a dozen directing credits and a couple of those films were Academy Award nominees (Breaking Away and The Dresser). The music is provided by James Horner, a frequent James Cameron contributor. Horner’s score for Titanic remains the bestselling orchestral soundtrack ever. The music for Krull is one of the film’s highlights.

All the name stars in this movie have have gone on to bigger and better things. Okay, that’s a lie. Nobody really remembers the names of Ken Marshall and Lysette Anthony. Freddie Jones had a long and memorable career as a character actor. and the luminous Francesca Annis, in a minor but pivotal role, is still in the business after seven decades of film and television. Both are well known British actors and, coincidentally, both had significant roles in the movie Dune.

The only truly familiar faces in the movie, the ones everybody knows (and are probably surprised to see in Krull), are Liam Neeson and Robbie Coltrane. Neither of their names are on the poster, but at least their characters (Keegan and Rhun, respectively) get a few lines of dialogue apiece. Some of those lines are actually pretty damn good.

The entire movie, the plot, the characters, the antagonists, our hero and his princess, all exist in this limbo, split right up the middle of good and bad, memorable or entirely forgettable. Plot holes are balanced by wonderful –or very  weird–moments. Phony, plastic looking sets are quickly give way to breathtaking Spanish and Italian landscapes. Awkwardly stilted dialogue is soon drowned out by near heartbreaking lines delivered by experienced Shakespearean level performers.

I was wrong. The journey was worthwhile. Finish it for me.

Or the blazing hooves of fire-mares galloping through the night. 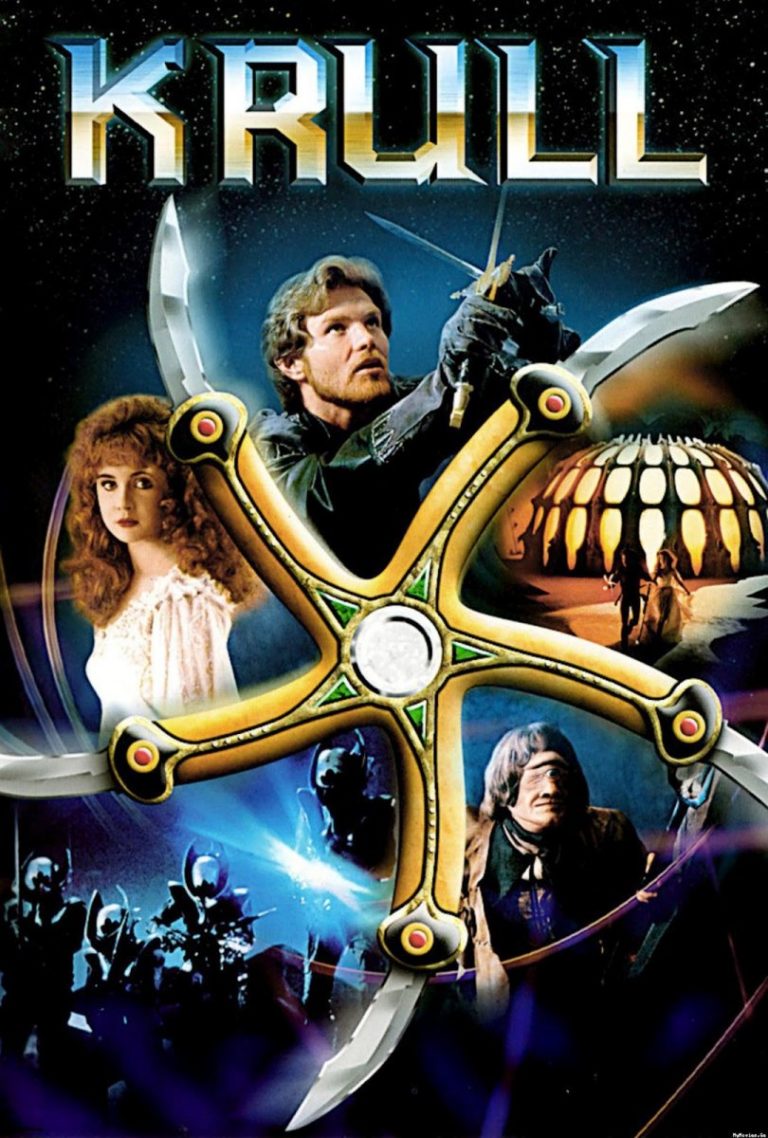 I’m pretty sure at least two of those are fake. By definition, any movie with David Carradine in a lead role is a cult movie. Go on. Look it up. They won’t all be […]

Ferrets, and tigers, and hawks … oh my! The Beastmaster is one of many “Sword & Sorcery” movies which were very much in style during the 80s. I have read reviews that suggest the […]