The Beastmaster is one of many “Sword & Sorcery” movies which were very much in style during the 80s. I have read reviews that suggest the animals give the best performances in the movie. I’m not sure I disagree. In addition to a variety of performers with either paws or claws, The Beastmaster also stars Rip Torn as a deliciously evil sorcerer/priest with a weirdly prosthetic nose. Torn is not known for subtle performances, and this is a case in point. While The Beastmaster might be “slumming it” for Torn, he’s well cast as Maax (pronounced “may-aks”, in case you’re wondering).

If you are one of the thousands who may have caught it on cable in the 80’s and 90’s, you probably remember it fondly. Still, The Beastmaster may be one of those movies that is better remembered than re-watched. I’m always happy to watch it again–Tanya Roberts alone is motivation enough–but your experience may differ.

The stars of The Beastmaster are Marc Singer, buff and shirtless, and Tanya Roberts, also briefly but gloriously topless. I’m not convinced either of the two can act, but they completely nail the eye-candy requirements of their respective roles as the Beastmaster, Dar, and the slavegirl Kiri.

John Amos, who has appeared in all kinds of television over the years, including “Good Times” and “Roots”, turns in a solid performance as Seth, Dar’s eventual ally in his confrontation against Maax and his minions.

Don't move. The beast is fierce. But if we show no fear, we might escape.

Don Coscarelli wrote and directed The Beastmaster; Coscarelli is probably best known for writing and directing the Phantasm movies. He credits Andre Norton and his novel of the same title as his inspiration for The Beastmaster. While The Beastmaster made only a moderate impact in theaters, taking in around $14 million, the popularity of the film took off with multiple (possibly hundreds) of cable airings on both TBS and HBO.

The production values and sets on this film are better than average. The entire movie was filmed in California, but the landscapes are exotic enough to be believable. As mentioned earlier, the animals play their parts well, even though the black tiger has clearly been dyed that color. Ferrets are, by all reports, untrainable … but they’re cute little buggers. The demon “hawkmen” are particularly well done and score high on the “creepy” meter. Their unique methodology for dealing with prey is cringe-worthy, outdone only by an odd reverse-pregnancy effect that, while disturbing, is less than convincing.

Lee Holdridge provides the music. Most of his work has been for television, but this is a very competent, if not particularly memorable, score. It fits the movie well. The Beastmaster is the quintessential 1980s sword and sorcery epic.

Overall, The Beastmaster withstands the test of time and it has aged fairly well, probably better than any of its stars. Oddly enough, there does not appear to be a blu-ray version available for Region A/1 (North America). 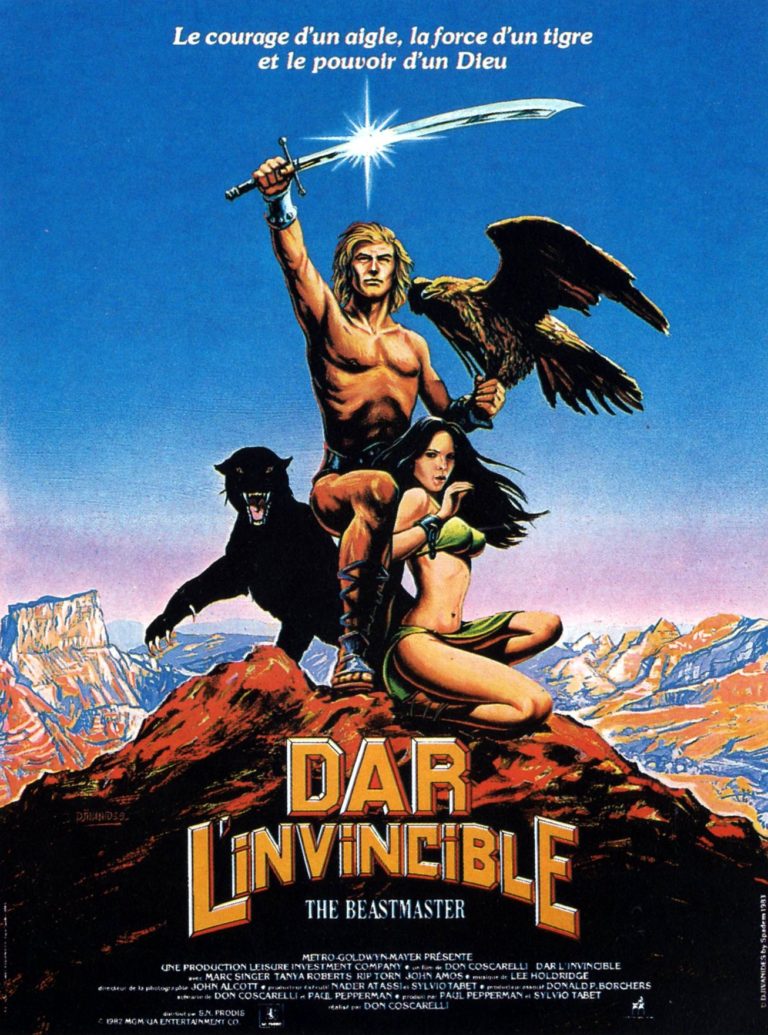 Actors are marginal 'A' list or top-tier 'B'; their acting is not great, but not bad either (despite overacting from Torn); makeup effects are cheesy, plastic, yet pretty creepy; minimal blood/gore.

A girl of ancient name shall become queen … Long before we had the Lord of the Rings Trilogy, we had the 1980’s. Headed up by the Arnold Schwarzenegger vehicle Conan the Barbarian, the […]

I’m pretty sure at least two of those are fake. By definition, any movie with David Carradine in a lead role is a cult movie. Go on. Look it up. They won’t all be […]