The gold standard of cult classics

Sergio Leone’s classic western The Good, the Bad and the Ugly, starring Clint Eastwood, was a hit by any measure. Critically, it sits at 97% on Rotten Tomatoes. IMDB sets the film at 8.9 out of 10 and Metacritic gives it an overall score of 90 (despite a ridiculous 60 awarded by Variety). Financially, this last installment in Leone’s “Dollars” trilogy was an unqualified hit, racking up $25 million with its 1966 U.S. release in addition to the $6 million it made in Italy. The movie cost just 1.2 million to make, $250,000 for Eastwood’s salary alone. He was also paid a percentage of the films profits … and a Ferrari.

However, again by almost any measure, The Good, the Bad and the Ugly is also a cult classic. The “Spaghetti Western” is a cult genre in it’s own right. A large cross-section of cult movies are not American made and the Italians (even when they are actually Spaniards) are responsible for a significant number of those, some westerns, more in the horror and “sexploitation” genres. A film does not need to be obscure or a financial or critical failure to be considered “cult”.

In Italian, the film is called Il Buono, il brutto, il cattivo, which translates as “The good, the ugly, the bad”. The Italian title might be responsible for some early confusion in the advertising for the movie for the U.S. market, in which “the bad” and “the ugly” were briefly mislabeled.

Lee Van Cleef, as Angel Eyes, is slotted into the “bad” position, while Eli Wallach as Tuco is the “ugly”. Early U.S. trailers had those labels reversed. Obviously, Clint Eastwood as Blondie was the “good” character; there was never any confusion on that account. Despite these labels, all three characters operate in various shades of gray. It could also be argued that Eastwood’s Blondie is the most duplicitous of the lot.

The performances by all three leading men never hit a false note. While Van Cleef and Eastwood would both become icons of the Western genre, Wallach carries this film. His is a career making performance. Wallach is responsible for most of the humor throughout the movie and he has, by far, the greatest amount of dialogue. Clint Eastwood gives us another variation on his “silent gunslinger” role that he inhabits so well. Van Cleef is just pure, steely eyed badness at every level. And I mean that in the very best way.

If you work for a living, why do you kill yourself working?

Filmed primarily in Spain, the locations are near perfect simulacrums of the southwest U.S. around the time of the Civil War. Maybe we’re just so accustomed to this scenery appearing in so many westerns (Italian made, Spanish, or otherwise) that we have just come to believe that this is what the American west looked like. Leone put a lot of research and time into achieving this level of authenticity and it all comes through on film. Still, many props (including various weapons) are out of place for 1862 and, if you’re watching closely, errant automobiles may be spotted in a couple of scenes. If you really, really know your Civil War era armaments, this might present a distraction. Otherwise, these minor issues do not detract in the least from the film’s overall impact.

The Good, the Bad, and the Ugly has all the usual hallmarks of a Leone western, even if it is a little more polished than its predecessors, A Fistful of Dollars and For a Few Dollars More. For those familiar with the trilogy, The Good, the Bad and the Ugly was the last to be made but it’s the first in the chronology of the series with certain developments–however minor–leading directly into the other two films.

Cult status or not, the historical relevance of this movie cannot be understated. It stacks up against any of its contemporaries, including High Noon, The Searchers, or Sergio Leone’s other masterpiece (which Eastwood turned down), Once Upon a Time in the West. 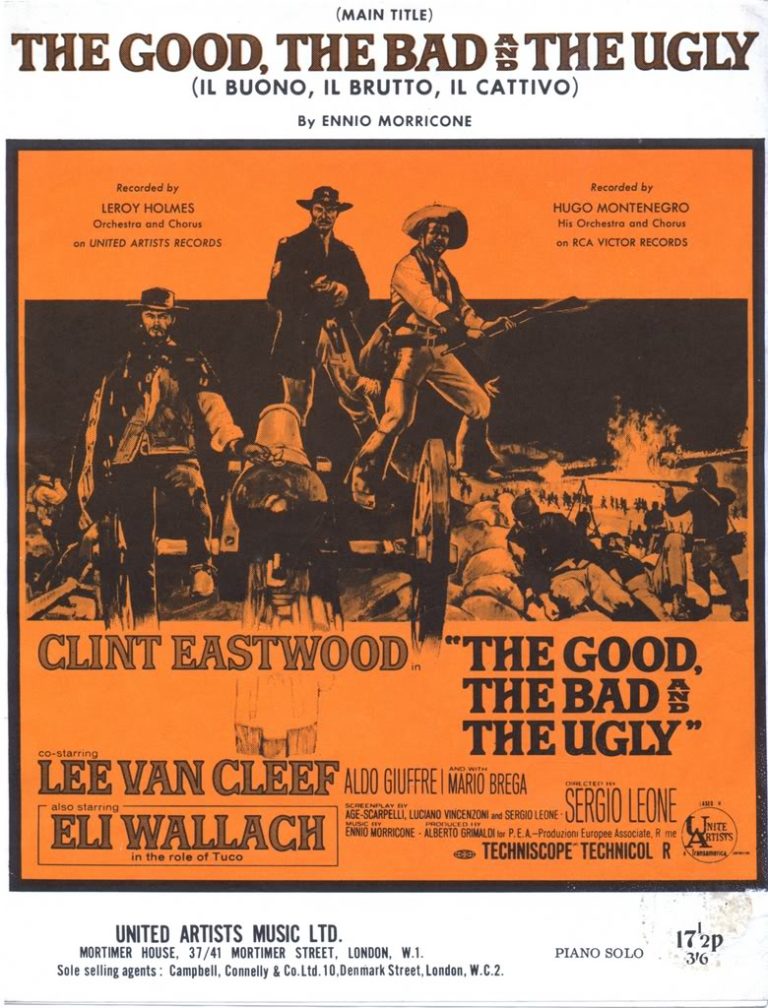 Piano Music for The Good, the Bad and the Ugly

When you have to shoot, shoot. Don't talk.

Along with the other films in the series, The Good, the Bad and the Ugly redefined the genre … and launched the decades spanning career of Clint Eastwood. These films define the “spaghetti western” genre more than any others ever made, including those by Leone himself.

Though the production level is better than most, it is still a Spaghetti Western; English dubbing (good quality); minor anachronisms.

Fairly violent and bloody for a western (compared to American films of the time period); no nudity; very little sex (none graphic).

That doll was just too creepy to live. As Italian murder thrillers go, this one is a good example of what you should expect from the “giallo” genre. It has all the usual features, like […]