That doll was just too creepy to live.

As Italian murder thrillers go, this one is a good example of what you should expect from the “giallo” genre. It has all the usual features, like an weirdly complex plot, plenty of spilled blood with requisite over-the-top violence, familiar Italian performers (most of them female), random–sometimes unexpected–nudity, and your masked psycho killer, complete with the gloves and variety of murderous means to her nefarious ends. The Red Queen Kills Seven Times—La dama rossa uccide sette volte in the original Italian–may well be the poster child for giallo variety psycho killers.

Right up until her identity is finally revealed anyway. That revelation combines with the resolution of the plot to provide a somewhat unsatisfactory ending. You’ve heard the phrase “well, I guess that just happened”; I suspect that cliche was created specifically for movies like this.

The entire film is populated by unsavory characters of questionable character–finding a “hero” in this lot is a waste of time really–but that’s really not important. Everyone is a suspect right up until the time they become one of the killer’s seven anticipated victims.

Do you really want to turn down a woman like me?

If you put any real effort toward patching up the plot holes, you’re likely wasting your time. There just isn’t that much spackle to be found in all of Italy. But don’t let any of that put you off. Though the movie kind of limps to its inevitable conclusion, The Red Queen Kills Seven Times is still a fun ride overall.

Emilio Miraglia directs the movie and, based upon his credits, the Red Queen is clearly the highlight of his directing career. Well, this and possibly The Night Evelyn Came Out of the Grave. But while Evelyn is a dark, brooding beast, The Red Queen is bright, 70’s mod styling, visuals and splash. The music is typical giallo, provided by Bruno Nicolai, a consistent and frequent giallo regular whose credits include past work with Sergio Leone and Ennio Morricone (The Good, the Bad and the Ugly, etc.). While he may not be that well known outside of his native Italy, Nicolai appears to have been the conductor, composer, or contributor to the soundtrack of nearly every movie ever made in Italy. He is also well known as a frequent collaborator with Jess Franco.

The Red Queen Kills Seven Times stars Barbara Bouchet as Kitty. Bouchet is a well known and successful star of countless giallo films, as well as other movies in Italy and elsewhere. She has also appeared in Casino Royale (the comedic, “non-canonical” 1967 Bond movie), and in episodes of The Man from U.N.C.L.E. and Star Trek television series. She has a brief (and not overly graphic) rape scene in this movie that contributes nothing to the overall plot whatsoever. Even for those of us who might be borderline misogynists with a high tolerance for such things will recognize that this scene is entirely unnecessary.

Poor Kitty ... how surprised she'd be if she knew what really happened.

The movie also stars Sybil Danning, the Austrian born international queen of ‘B’ movies of the seventies and eighties, in one of her earlier roles. Her nude scenes are always a treat for her fans–of which I am certainly one–and she has a couple in The Red Queen. As Lulu Palm, Danning is in her prime and she shows it. Despite the appearance of Danning in all her majestic glory and the rape scene involving Bouchet, this film is rated PG. Of course, that’s a ‘PG’ rating from the seventies when most of the world, including the US, was not nearly as scared of boobies as we are today. Yay, progress.

The female cast is rounded out by Marina Malfatti as Franziska and Pia Giancaro as Rosemary. The male cast features leading man Ugo Pagliai as Martin Hoffmann, Nino Korda as Herbert Zieler, Fabrizio Moresco as Peter, and Marino Masé as the “Police Inspector”.

If you’re a fan of the female cast, The Red Queen Kills Seven Times is eminently watchable. The same can be said if you’re just a fan of the genre. Even if your neither of those, if you can tolerate a bit of high-pitched, hysterical giggling from our masked killer, you might enjoy the movie, at least a little. If nothing else, it is a good sample of the genre without overwhelming the average viewer. 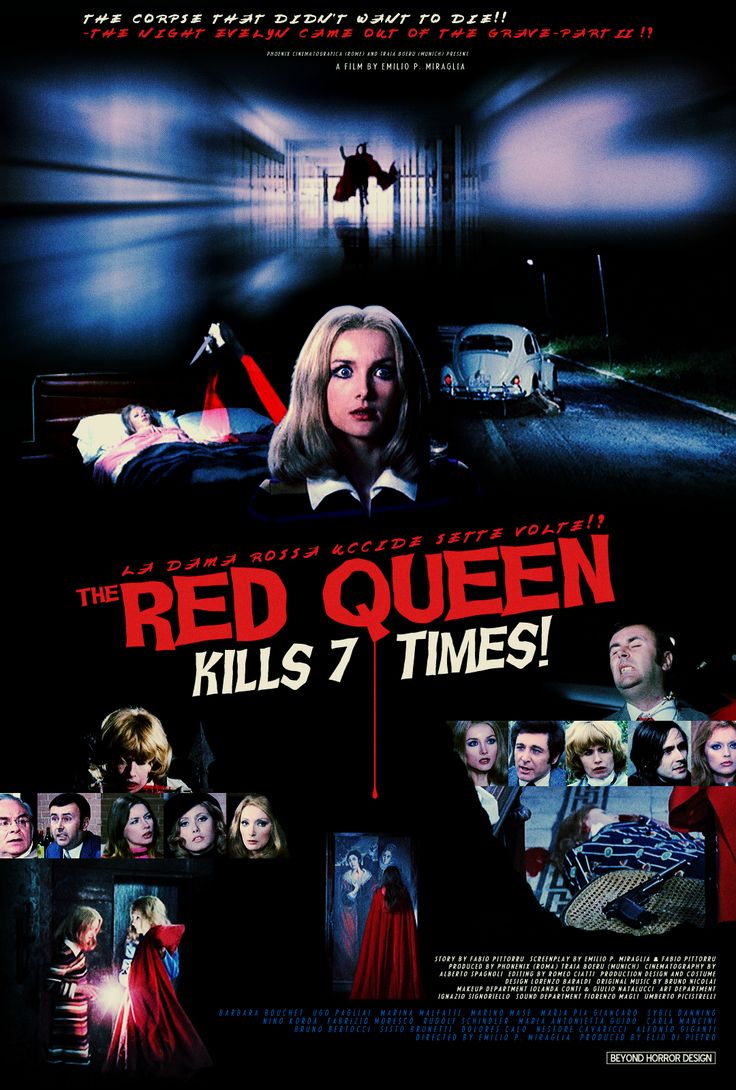 Cast filled with genre stars like Barbara Bouchet and Sybil Danning; good overall production values, including musical score and scenery; not that far over-the-top in general.

Emilio Miraglia is an unaccomplished but competent director; Bouchet is a treat, but her acting is over-the-top; effects are standard for the genre, if unrealistic; plot is pretty silly, as is the killer.

Italian detectives always have the best mustaches. The Italians are huge contributors to cult cinema. So much so, they get two genres of their own. One is the well known Spaghetti Western genre featuring […]